Do you have any ideas for this blog, email us? Or perhaps you are ready to Place an Order?

Following previous article, in light of all unfrairness in today's laundry market we decided it's time for a change, cut all the crap and do something about it. That's how Liox Laundry Bin was born..

Let’s cut the middle man and go straight to the consumer, and be completely clear and upfront about what you pay for and what you get. Pay 40 cents per lb and you can have the cheapest laundry ever, but you will receive it unfolded. 50 cents will get you a regular wholesale wash. 80 cents all the perks of separated colors, special detergents etc.

After 2 weeks of programming a brand new driver mobile app system of accepting orders and the server side of notifications and payment system, designing special tickets, and heavily promoting service in Upper East Side we were finally ready to launch. We hired and trained a bunch of drivers, made them wear liox uniform, and armed them with Liox signs and flyers. 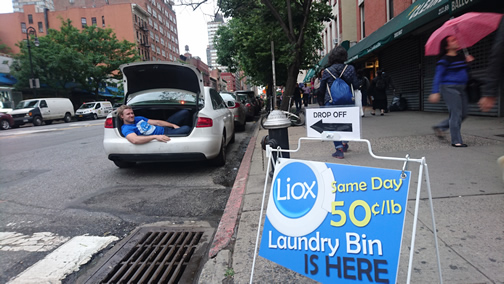 Wait, there is a catch! The drivers won’t be driving, but will be mobile shops standing at the same location in the morning and evening of every day of the week.

Everyone who heard about this service was shocked about how cheap it is. For the first week everyone thought it was just a stunt, pure promotion, and the drivers standing outside were just for show. The only people who were interested in service wanted it to be delivered and didn't want to bring it to us, they didn't care much about the cost either.

After 2 weeks since Laundry Bin was launched we only got less than a handful of bags and better understanding of how the New York consumers’ minds work. In 99% of cases people value convenience over cost and reliability over quality. They want to know that you are the real thing and not how and where it is done. 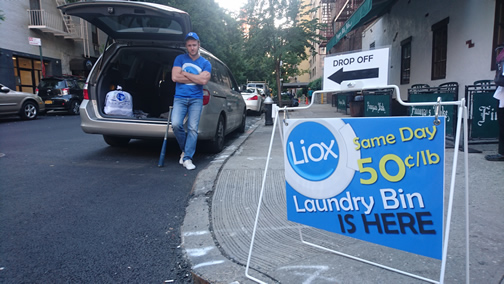 That was the end of the Laundry Bin experiment.
P.S. And even my bat couldn't help it.

Ready to have more free time?

Ready to have some more free time?

Want to cross laundry off your list for good?

Want to cross cleaning home off your list for good?